Ion-exchange resin is resin that exchanges ions by seizing the ions in water and releasing its own ions in exchange. 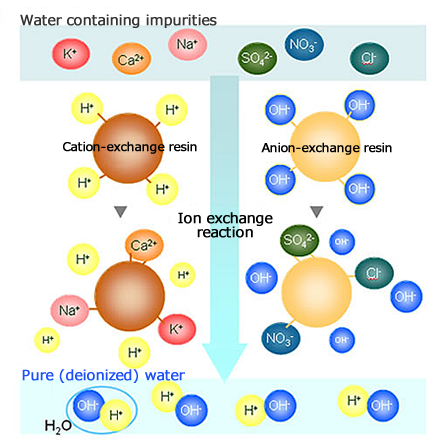 *Pure water: Pure (deionized) water is tap water or another form of water from which cations such as sodium, calcium, and magnesium and anions such as chlorine and carbonic acid have been removed. It is used in various industries for its characteristic of not containing minerals or chlorine.

Chromatographic separation differs from ion exchange in that target and non-target ions are separated without being adsorbed into ion-exchange resin. When target and non-target ions pass through the resin layer, they are affected by various factors such as the ion exchange group in the ion-exchange resin and the structure of the matrix, and differences arise in the speed of passing through the resin layer. This difference is used to separate substances.
Resin dipping with a solution containing the target → dipping with developer → recovery of target (repeat continuously)

※ Selecting resin so that at least one of the target or the non-target, or both substances enter (diffuse through) the resin.

Sieving using the difference in molecular weight of the target and non-target substances.

※Selecting resin so that both the target and the non-target enter (diffuse through) the resin.

Uses differences in repulsion of the exchange group to the target and non-target substances.
The substance receiving the strongest repulsion effect comes out of the resin layer first.

Selecting so that at least the target substance enters (diffuses through) the resin.

A substance with a high affinity for the target is adsorbed into the exchange group of the resin in advance so that the target stays or adsorbs longer than the non-target. The non-target is flushed out first, then the target is dissolved out or recovered by driving it out with developer. (For adsorption, the “ionic adsorption” method is used; to create a long retention period, the “chromatographic separation” method is used.)

These elements do not control their own separation alone, but are used in combination to achieve the principle of separation (separation mechanism). Detailed information is required on the entire system including both the target and the non-target to determine what element is effective for separation or what element should be used as the main component for attempting separation.